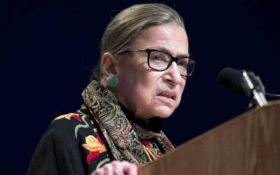 Ruth Bader Ginsburg is the Queen liberal on the Supreme Court. She’s admired by so many leftists for her progressive views.

But her announcement this week angered the Democrat hate-machine. Ginsberg has begun to heap praise on conservative Justice Brett Kavanaugh, the man who narrowly survived an all-out smear campaign from deranged leftists after he was nominated last year by President Donald Trump.

While speaking at a conference last Friday night for judges in New York, Ginsburg announced that Kavanaugh has made history — and become the first Justice to hire all female law clerks to serve on the nation’s highest court.

“Justice Kavanaugh made history by bringing on board an all-female law clerk crew. Thanks to his selections, the Court has this Term, for the first time ever, more women than men serving as law clerks,” Ginsburg told the stunned audience.

While Kavanaugh was fighting for his life against an ambush from the Democrat Party back in October, he had promised to hire female law clerks to show that he supports promoting qualified women.

“Before this allegation arose two weeks ago, I was required to start making certain administrative preparations for my possible transfer to the Supreme Court, just in case I was confirmed,” Kavanaugh said. “I did so, and contingently hired four law clerks. All four are women. If confirmed, I’ll be the first justice in the history of the Supreme Court to have a group of all-women law clerks. That is who I am.”

Ginsburg’s announcement is a big deal for a few reasons.

When the 86-year-old Ginsberg fell ill late last year, liberals on social media were so terrified that they literally offered their own body parts to help keep her alive after surgery. Just months later, she’s going public with high praise for Kavanaugh… a move that will undoubtedly upset many on the radical left.

They hadn’t expected her to stay alive only to celebrate conservatives. The move deviates from Democrats’ typical sneaky tactics. They tend to get away from the issues. Proof of this was on full display during the Kavanaugh confirmation hearing.

Rather than attacking Kavanaugh for his views or previous court opinions, Democrats unearthed allegations from four decades ago to accuse him of taking part in gang rape and drugging girls when he was in high school.

Democrats brought forward allegations from four women who claimed Kavanaugh sexually assaulted them when they were in high school in the early 1980s.

The most notable was Dr. Christine Blasey Ford, who claimed Kavanaugh threw her on a bed and groped her at a pool party around 1983.

When pressed for evidence, she had none. When people she claimed witnessed the “assault” were questioned by the FBI and congressional investigators, not a single person corroborated her story.

One of the other notable women was Julie Swetnick, a woman represented by lawyer Michael Avenatti. Swetnick wrote in a sworn affidavit that Kavanaugh took part in drugging women and gang raping them at high school parties.

She later admitted that she was not certain about her own claims.

Ford, Swetnick, and the others all failed in their attempt to help the Democrats ruin Kavanaugh’s life.

And now that he’s sitting on the Supreme Court, it’s clear that Kavanaugh is doing exactly what he promised to the American people.

He’s ruling on cases based on the U.S. Constitution and law, not politics or what’s popular.

Less than a year on the job, he already became the first Justice in Supreme Court history to hire all females to serve as his law clerks.

He’s doing such a great job, even the most liberal Justice of all time has no choice but to offer praise.