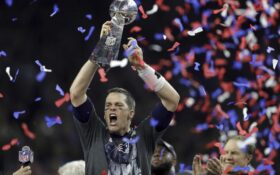 A rare football card featuring Tom Brady in the year he won his first Super Bowl sold for $118,000 at auction in Maine.

The 2002 Topps Finest X-Fractor card was one of only 20 featuring the NFL quarterback who’d won his first Super Bowl on Feb. 3, 2002. Before retiring, he won a total of of seven Super Bowls — six with the New England Patriots and one with the Tampa Bay Buccaneers.

The winning bidder was identified only as a Brady fan from New England, said Troy Thibodeau from Saco River Auction.

No one is hotter in the collectible card industry right now than Brady. A pair of signed rookie football cards sold for $2.25 million and $3.1 million last year.

Read more: Tom Brady retires after spending half his life in the league