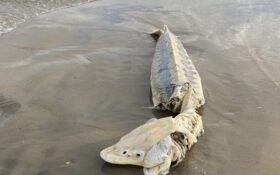 A rare and prehistoric fish has washed up on Virginia Beach’s oceanfront.

The Virginian-Pilot reports that the nearly five-foot long Atlantic sturgeon was found Saturday near 20th Street.

Atlantic sturgeon are protected under the federal Endangered Species Act. The species used to have vast populations along the Atlantic coast. But it was decimated by a caviar rush in the late 1800s because sturgeon eggs were considered a delicacy in Europe.

Female Atlantic sturgeon lay eggs in the fall in the rivers of the Chesapeake Bay, and then migrate offshore, marine biologist Noelle Mathies said. She added that it’s rare to find a sturgeon so quickly after it has died.

Sturgeon swam with the dinosaurs. Bony plates line their bodies. Whisker-like barbels hang from their chins. Their toothless mouths telescope out and vacuum up anything from worms to mussels.

Their meat fed Native Americans, the starving settlers of Jamestown and the Lewis and Clark expedition.

Sponsored: How-to slash your risk of memory loss 65% </a

In recent years, scientists have been seeing increased numbers of sturgeon in some rivers because of cleaner water, dam removals and fishing bans. These discoveries provide some hope for a fish that is among the world’s most threatened.

You can see a picture of the sturgeon below: 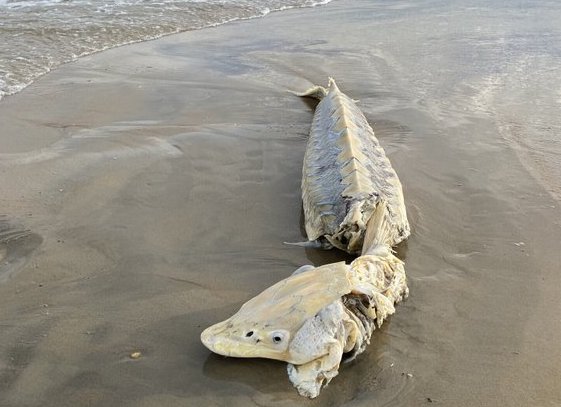