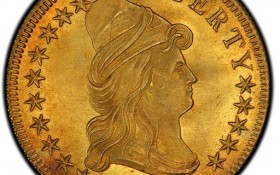 Who knew quarters could be worth so much? A New York auction of American coins from 1792 to the 1830s fetched $26 million on Wednesday.

The auction was held jointly by Stack’s Bowers and Sotheby’s.

The 105-coin sale was the second of five auctions of federal coinage from the D. Brent Pogue Collection.

Among the stars of the sale was a 1794 Flowing Hair Silver Dollar, known as the Lord Saint Oswald specimen. It sold for nearly $5 million, in line with its high presale estimate.

The coin was acquired in Philadelphia after its mintage by British author and House of Lords member William Strickland. It remained in the possession of his descendants until a 1964 auction. Among its previous owners was former Louisiana Congressman Jimmy Hayes.

Another highlight was a 1795 Capped Bust Right Eagle, also known as the Garrett Eagle. It was worth $10 when it was minted and sold Wednesday for $2.5 million. It is considered the single finest surviving U.S. gold coin struck in the 18th century.

Stack’s said it was the most valuable $10 gold piece in existence and set a new record for any pre-Gold Rush United States gold coin sold at public auction.

The 1795 coin was once owned by T. Harrison Garrett, a Baltimore banker, and later his sons, who donated it to Johns Hopkins University in 1942. It was later sold at auction.

Pogue, a Dallas property developer, spent decades amassing 650 early American coins. Valued at $200 million, it is believed to be the most valuable rare coin collection in the world.

In May, the two auction houses sold 128 coins from his collection for $25.3 million.