'Rapes, robberies' and riots - inside Seattle's CHOP - The Horn News 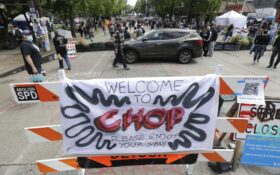 It took them less than a week to turn their six-block commune into a criminal hellhole, with rapes, violent crimes, and armed thugs shaking down businesses and bullying people on the street.

Rioters busted windows and spray-painted everything in the district. When the city’s liberal Democratic leaders abandoned the local police precinct, the looters renamed it the “Seattle People’s Department” and hung a banner on the building that says, “THIS SPACE IS NOW PROPERTY OF THE SEATTLE PEOPLE.”

CHAZ’s organizers said they had set up their own private, left-wing, independent nation—and the cops aren’t welcome there.

But almost immediately, a string of serious lawlessness broke out—and residents trapped inside the protesters’ paradise bombarded the police and fire departments with calls for help.

Seattle Police Chief Carmen Best told local KIRO TV that, since CHAZ dwellers still call “our 911, our response times have tripled in the area. They’ve gone from just under 5 minutes to about 18 minutes.”

They report serious felonies in the zone, including “rapes, robberies, and all sorts of violent acts that have been occurring in the area that we’re not able to get to,” she said.

In another video, a CHAZ resident is interrogated by an angry mob and threatened with a baseball bat.

The sight of anonymous people prowling the alley with rifles and a 50-caliber Desert Eagle pistol has the people who actually lives in the area back when it was still called Seattle scared witless.

“We’re not real easy with the autonomous zone,” a 72-year-old man who lives nearby told The Seattle Times. “They’re just random guys and they have a gun.”

“The street’s barricaded so emergency vehicles can’t get through,” he said.

Another resident, who asked to be identified only as Brandon, said, “I’ve been scared every day since Sunday, and I haven’t gotten a lot of sleep.”

“Citizens and businesses being asked to pay a fee to operate within this area,” said Assistant SPD Chief Deanna Nollette on Wednesday. “This is a crime of extortion.”

The open-borders types in CHAZ, who demand amnesty for illegal aliens, have been policing their own borders, demanding an ID to enter.

Police officers have “been hearing from community members that they have been subjected to barricades set up by the protesters with some armed individuals running them as checkpoints in the neighborhood,” Nollette said.

But the next day Seattle’s Democratic mayor, Jenny Durkan, threw her own police force under the bus and openly sided with the rioters.

Durkan said she remains “committed to listening”—to the rioters—inviting them “to reimagine how we do things as a city.”

While the Democrat admitted there had been “some vandalism” and “a fight,” she claimed that anything else was just a story that police had “heard anecdotally.”

As usual, the Democrats said the real threat to safety is President Donald Trump.

Washington Gov. Jay Inslee—who was one of the dozens of Democrats to run unsuccessfully for president in 2020—said CHAZ’s “peaceful protests are fundamentally American.”

“What we will not allow are threats of military violence against Washingtonians coming from the White House,” he said.

Trump called lawbreaking CHAZ organizers “domestic terrorists” and threatened to send in the National Guard to restore order, if Durkan and Inslee won’t.

Inslee replied that “the U.S. military serves to protect Americans, not the fragility of an insecure president.”

Sen. John Kennedy, R-La., told Fox News if you like the CHAZ crime spree, you’ll love it when Democrats “defund the police.”

CHAZ is “a dress rehearsal for life in America without law enforcement,” he said.

Governor Inslee and “the mayor needs to take her meds. She can’t maintain order in Seattle without her law enforcement officials.”

If she’d listened to her own constituents instead of the left-wing vanguard in CHAZ, she’d already know that.