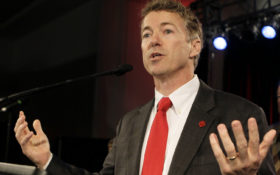 As a third government shutdown nears, all eyes turn to Senator Rand Paul who has publicly spoken out against the new spending bill.

Although he has remained silent about his plans for this week, two recent Tweets have important information that every American voter should know.

He noted that the bill took over 2 hours to print in his office. Not only is the paper waste a huge cost, but Paul also has made it clear how much the $1.3 trillion bill is going to impact our country.

“Well here it is, all 2,232 budget-busting pages. The House already started votes on it. The Senate is expected to soon. No one has read it. Congress is broken…,” he tweeted Thursday.

Well here it is, all 2,232 budget-busting pages. The House already started votes on it. The Senate is expected to soon. No one has read it. Congress is broken… pic.twitter.com/izvJlUEgUM

Earlier Thursday, Paul had explained that he was still undecided on the legislation, but still took a jab at the leadership who is forcing a vote on a bill that does not exist.

“It’s inexcusable that there’s no bill and people are asking how we’re going to vote on a bill that doesn’t exist yet, so whoever is in charge of this ought to actually put the bill forward,” he said.

In February, Paul was subject to the abuse of his colleagues after causing a government shutdown. He was the only senator to stand against the budget deal that paved the way for the omnibus.

House Republican, Rep. Charlie Dent said, “When Rand Paul pulls a stunt like this, it easy to understand why it’s difficult to be Rand Paul’s next door neighbor,” noting that Paul was assaulted by his neighbor.

The Hill reported, “Sen. John Thune, the No. 3 Senate Republican, acknowledged it could be ‘challenging’ to get Paul, and possibly other Republican critics of the bill, to agree to speed up time and pass legislation before a midnight Friday deadline.”

Senate Majority Whip John Cornyn, who called Paul “grossly irresponsible,” noted that he had not spoken to Paul yet, but  “anything can happen around here.”

Do you agree with Rand Paul about the $1.3 trillion budget?