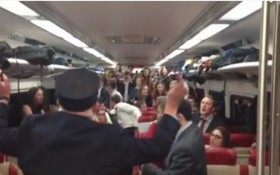 A railroad conductor became a choral conductor last week when he found his commuter train was carrying the Yale Glee Club.

Dan Rubins, the Glee Club president, says they were on a Metro-North train headed back to New Haven, Connecticut, from a concert at the Yale University Club in New York on Friday night. That’s when conductor Bob McDonough asked them to sing.

“I’m the conductor, let me conduct,” he says on video recorded by club member Greg Suralik and posted on Facebook.

The group then breaks into the “Carol of the Bells,” much to McDonough’s delight.

Rubins says the group also had McDonough as their conductor on the way to New York and had sung for him then.

He says the Glee Club also performed for passengers waiting for their trains at Grand Central Station.