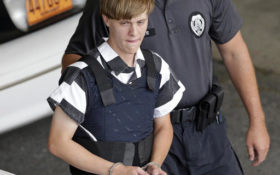 The younger sister of Dylann Roof, the racist killer that slaughtered nine black parishioners during their Bible study in 2015, was arrested after a protest at her high school on Wednesday.

Morgan Roof was charged with carrying weapons on school grounds and for simple possession of marijuana, The State reported Wednesday. According to the Richland County Sheriff’s Department, the 18-year-old Roof made inappropriate on social media when she posted that she hoped her classmates would “trapped” outside and all “get shot.”

After her post, she was questioned by police and reportedly found to be in possession of illegal weapons and drugs.

A judge set her bond at $5,000. She was screened for a public defender, and she is not allowed to return to the school.

Investigators say Roof also posted a Snapchat that alarmed fellow students, but was not arrested for it.

Social media users shared her message, in which she expresses disagreement with the protest —

This is Morgan Roof, Dylann Roofs little sister, her snapchats there and all do your thang twitter pic.twitter.com/MttSF875is