This means DOOM for Rachel Maddow (must see) - The Horn News 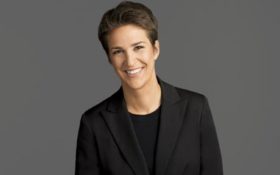 They’re calling it the “Trump Slump” — and it means doom for MSNBC Rachael Maddow.

Americans are turning off, tuning out, and shutting down the liberal news attacking President Donald Trump in record numbers.

A new report finds that ratings are down across the board for the media. Also, page views are down online when it comes to reports about the president.

Axios said the usual “Trump Bump” has turned into that slump. The jump in traffic that has usually accompanied news about the president is wearing off.

The stories don’t click… and viewers don’t watch… the way they used to.

And Maddow, CNN, and the rest are suffering because of it.

Because Americans aren’t sick of Trump himself.

Look at the evidence – look at the numbers – and you’ll see they’re fed up with something else entirely.

Voters are fed up with the liberal media bashing him 24 hours a day when the economy is humming, jobs are growing and even manufacturing is returning to the United States.

The result is a dying “resistance” movement that could guarantee Trump’s reelection and may even help ensure that Republicans not only retain control over the Senate but regain the House.

The Axios report finds that “digital demand” for Trump stories on news websites has plunged by 29 percent over the past six months when compared to the first six months of the Trump presidency.

The New York Times even admitted that the jump in subscriptions seen when Trump won the 2016 election is gone – actually ending in the middle of last year.

The media has tried to spin the news as a sign of overall Trump fatigue – that Americans are tiring of the president.

But there’s a flaw with that theory.

See, there’s one part of the media that’s hardly been touched by the Trump Slump.

“Wow, Fox News did great in the ratings,” Trump tweeted as the most recent numbers were announced. “CNN is dead as a doornail (no credibility), and MSNBC is dying fast.”

He’s not wrong: New cable ratings show Fox News remains not only the number one cable news network – by far – but also the number one network on cable, period.

ESPN, HGTV, and A&E filled out the rest of the top five.

CNN didn’t even crack the top 5.

It didn’t crack the top 10 either!

It finished in 13th, averaging a weak 853,000 primetime viewers… or less than a third of the Fox News average.

It proves that Americans aren’t sick of Trump. They’re sick of the anti-Trump media – especially as the economy continues to grow and people are getting back to work.

And as the sagging MSNBC and CNN numbers show, it’s likely that even the ones who hate Trump are losing energy.

The resistance is dying.

They no longer have the same enthusiasm for opposing Trump. And given that there isn’t a single Democratic candidate showing any sign of re-energizing their base, that means the enthusiasm gap has vanished and turnout could be a problem next year for Democrats.

Fox News numbers remain high. And as his campaign kickoff showed, Trump can still pack arenas with screaming supporters – all enthusiastic voters who will turn out in November 2020.

Which means another six more years of media mediocrity for Maddow.

If she can last that long without being fired.