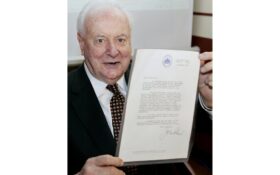 Australia’s highest court ruled on Friday to make public letters between Queen Elizabeth II and her representative that would reveal what knowledge she had, if any, of the dismissal of an Australian government in 1975.

The High Court’s 6-1 majority decision in historian Jenny Hocking’s appeal overturned lower court rulings that more than 200 letters between the now 94-year-old monarch of Britain and Australia and Governor-General Sir John Kerr before he dismissed Prime Minister Gough Whitlam’s government were personal and might never be made public.

The only dismissal of an elected Australian government on the authority of a British monarch triggered a political crisis that spurred many to call for Australia to sever its constitutional ties with Britain and create a republic with an Australian president. Suspicions of a U.S. Central Intelligence Agency conspiracy persist.

Hocking, a Monash University academic and Whitlam biographer, said she expected to read the 211 letters at the National Archives of Australia in Canberra next week when a coronavirus lockdown is lifted.

She described as absurd that communications between such key officials in the Australian system of government could be regarded as personal and confidential.

“That they could be seen as personal is quite frankly an insult to all our intelligence collectively — they’re not talking about the racing and the corgis,” Hocking told The Associated Press, referring to the queen’s interest in horse racing and the dog breed.

“It was not only the fact that they were described quite bizarrely as personal, but also that they were under an embargo set at the whim of the queen,” she added.

Archives director David Fricker later said staff had begun assessing whether there was any information in the letters that should still be withheld. The archives have 90 business days — or more than four months — to do so.

The archives has held the correspondence, known as the Palace Letters, since 1978. As state records, they should have been made public 31 years after they were created.

Under an agreement struck between Buckingham Palace and Government House, the governor-general’s official residence, months before Kerr resigned in 1978, the letters covering three tumultuous years of Australian politics were to remain secret until 2027. The private secretaries of both the sovereign and the governor-general in 2027 still could veto their release indefinitely under that agreement.

A Federal Court judge accepted the archives’ argument that the letters were personal and confidential. An appeals court upheld that ruling in a 2-1 decision.

Buckingham Palace said in a statement that the High Court decision was a “legal matter in the Australian courts and we would not comment.”

Dickie Arbiter, the queen’s spokesman for 12 years until 2000, said the letters should not be made public in her lifetime.

“I would have thought that the right time for the release of these documents is on the demise of the crown,” Arbiter told Nine Network television.

Hocking has been fighting since 2016 to access the letters written by Kerr to the queen through her then private secretary, Martin Charteris.

The British royal family is renowned for being protective of its privacy and keeping conversations confidential.

The family went to considerable lengths to conceal letters written by the queen’s son and heir, Prince Charles, in a comparable case in Britain that was fought through the courts for five years.

Britain’s Supreme Court ruled in 2015 that 27 memos written by Charles to British government ministers could be made public despite objections that their publication might damage public perceptions of the future king’s political neutrality.

Years of dogged research by journalists and historians have pieced together answers to many of the questions surrounding how and why Whitlam’s government was dismissed and who was behind it.

Kerr, who died in 1991, rejected in his memoirs media speculation that the CIA ordered Whitlam’s dismissal over fears that his government would close the top secret U.S. intelligence facility that still exists at Pine Gap in the Australian Outback.

In the 1985 Hollywood spy drama “The Falcon and the Snowman,” a CIA plot to oust Whitlam motivated a disillusioned civilian defense contractor played by Sean Penn to sell U.S. security secrets to the Soviet Union.

Australian rock band Midnight Oil also blamed “Uncle Sam” for Whitlam’s downfall in the lyrics of its protest song “Power and the Passion.”

The Australian Republic Movement, which campaigns for an Australian president to replace the British monarch as head of state, welcomed the ruling as a win for Australian sovereignty.

“These letters provide a crucial historical context around one of the most destabilizing and controversial chapters in Australian political history,” the movement’s Chair Peter FitzSimons said.

Philip Benwell, national chairman of the Australian Monarchist League and a vocal advocate of the British monarch remaining Australia’s head of state, had warned before the High Court decision that releasing the letters would create a constitutional crisis “if the queen’s personal opinions became known.”

He said after the ruling that the letters’ exposure will strengthen Australia’s ties to the monarchy.

“It will show that the queen had done everything that she could to protect the people’s interests,” Benwell said.