Queen Elizabeth compared Obama to... a helicopter!? - The Horn News 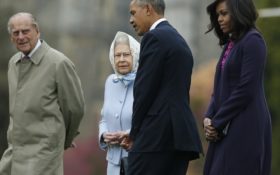 The British monarch, who will be 92 on April 21, was exploring her garden in a new 90 minute show, The Queen’s Green planet, airing next week in the U.K.

During her rare TV interview, Queen Elizabeth gave Attenborough a tour around Buckingham Palave when a noisy helicopter interrupted their tour from above.

“Why do they always go round and round when you want to talk?” Queen Elizabeth joked about the noise, according to News.com.au.

The British monarch met with Obama several times during his eight years in office, but she has never met with Trump.

Queen Elizabeth, who has held the throne for 66 years, touched on the issues of clime change after Attenborough had mentioned there could be “all kinds of different trees” growing in her gardens after some fifty years.

Trump has been offered a visit to the U.K. to meet the Queen, but has not yet taken her up on that offer. He is expected to meet the British monarch in the U.K. sometime during 2018.