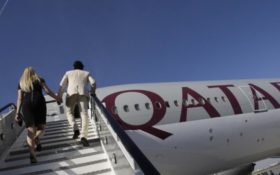 A quartet of Arab nations said early Wednesday they had received Qatar’s response to their demands for ending a diplomatic crisis gripping the Persian Gulf, just ahead of a planned meeting in Cairo.

Bahrain, Egypt, Saudi Arabia and the United Arab Emirates said in a joint statement they would respond “in a timely manner.” The countries did not elaborate on what steps they could take, though a major credit rating agency warned it had changed Qatar’s economic outlook to negative over the turmoil.

The countries cut ties to the FIFA 2022 World Cup host early last month over its alleged support for extremist groups and ties with Iran. Qatar denies supporting extremists and has defended its warm relations with Iran; the two countries share a massive undersea natural gas field.

The nations issued a 13-point list of demands on June 22, giving Qatar 10 days to comply. They later extended the deadline by another 48 hours at the request of Kuwait, which has acted as a mediator to resolve the crisis. That deadline expired early Wednesday morning.

Later Wednesday, foreign ministers from the four Arab countries will meet in Cairo to discuss their next move. Late Tuesday, Egypt’s state-run MENA news agency reported intelligence agency chiefs from those countries had met in Cairo, likely discussing the crisis.

What Qatar said in response to the demands remains unclear. It already had called the demands, which include shutting down its Al-Jazeera satellite news network, expelling Turkish military forces based in the country and paying restitution, as an affront to its sovereignty.

The crisis has become a global concern as neither side appears to be backing down. Qatar, the world’s biggest exporter of liquefied natural gas, hosts some 10,000 American troops at its sprawling al-Udeid Air Base. U.S. Secretary of State Rex Tillerson has been trying to ease tensions, while President Donald Trump’s comments on Qatar funding extremist groups back the Saudi-led countries’ position.

The nations could impose financial sanctions or force Qatar out of the Gulf Cooperation Council, a regional body known as the GCC that serves as a counterbalance to Iran.

Some Arab media outlets have suggested a military confrontation or a change of leadership in Qatar could be in the offing, but officials have said those options are not on the table.

Sponsored: Was THIS food on your dinner plate on July 4th?

On Tuesday, German Foreign Minister Sigmar Gabriel visited officials in both the United Arab Emirates and Qatar. He said Germany supported the UAE’s efforts at confronting those who fund extremists.

“We now have this opportunity to reach good results for the benefit of the whole region. The matter is not related only to the sovereignty of Qatar,” Gabriel said. “We have to come back to common work at the GCC and for the Europeans this is a very important matter. For us, the GCC is the guarantor of stability and security in the region.”

Emirati Foreign Minister Abdullah bin Zayed Al Nahyan kept up the pressure on Qatar in his own remarks to journalists.

“Enough is enough,” he added.

Qatar’s foreign minister meanwhile criticized the four Arab nations for trying to isolate Qatar “under the banner of fighting terrorism.”

“When measures clothed in this context, it is because they think they will be met with international sympathy because they are ‘anti-terrorism’ measures,” Sheikh Mohammed bin Abdulrahman Al Thani said.