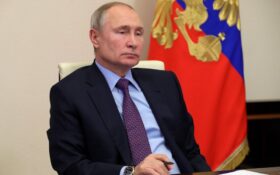 Russian dictator Vladimir Putin has become increasingly frustrated and paranoid, according to reports — and fearing he will be poisoned or assassinated soon, Putin has reportedly purged his entire personal staff.

Just a day after a public address where Putin denounced those Russians against his bloody invasion as “traitors” and “scum” and threatened to “spit out” domestic enemies, it was reported that an estimated 1,000 people have been fired and replaced around Putin in just the last month.

The purge of personnel is because Putin has become paranoid that he’ll be poisoned, Inside Edition reported.

Craig Copetas, an editor for The Daily Beast, told the publication that Putin not only replaced every single one of his personal staff, he also has started using other people to taste his food.

“Laundresses, secretaries, cooks — to a whole new group of people,” Copetas told Inside Edition. “The assessment from the intelligence community is that he’s scared.”

The Institute for the Study of War, a Washington, D.C.-based military think tank, reported that Putin has also purged top military commanders — up to eight generals “due to their failures in Ukraine” — and intelligence officers.

Putin had the head of the Fifth Service of the FSB (Federal Security Service), Russia’s main foreign intelligence office, placed under house arrest last week. Colonel-General Sergei Beseda and his top deputy have reportedly been charged with corruption and poor intelligence planning after Russian troops have failed to overcome stiff Ukrainian resistance after their unprovoked invasion.

Three weeks into the war, the bloody Russian advance has largely stalled outside most major Ukrainian cities.

Russian military forces have unleashed indiscriminate shelling of civilian centers in an effort to break Ukrainian will, but seem unable to coordinate effective offensive operations.

President Joe Biden flatly called Putin a “war criminal” for the unfolding onslaught in Ukraine, where hospitals and maternity wards have been bombed.

Russian forces destroyed a theater in Mariupol where hundreds of people were sheltering Wednesday and rained fire on other cities, Ukrainian officials said.

Putin has denied the reality that Russian forces have stalled and claimed during his speech Wednesday that the operation was unfolding “successfully, in strict accordance with pre-approved plans.” He also decried Western sanctions, accusing the West of trying to “squeeze us, to put pressure on us, to turn us into a weak, dependent country.”

And he accused Russians who are sympathetic to the West or have adopted Western lifestyles of being a “so-called fifth column” and “national traitors.”

The anti-Western speech and 1,000 personnel purge also came as Russian law enforcement announced the first known criminal cases under a new that allows for prison terms of up to 15 years for posting what the Kremlin deems is false information about the war. Among those charged was Veronika Belotserkovskaya, a Russian-language cookbook author and popular blogger living abroad.

Meanwhile, Ukraine and Russia resumed peace talks via video on Wednesday, with Ukraine’s negotiator Mikhailo Podolyak saying Ukraine was demanding a cease-fire, the withdrawal of Russian troops, and legal security guarantees for Ukraine from several countries.

‘Spit them out’: Putin threatens purge in shocking speech