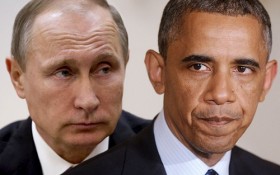 After years of insisting that Syrian President Bashar Assad be removed from office, the Obama administration has now yielded to Russian demands that he be left in power unless voted out.

At Obama’s behest, U.S. Secretary of State John Kerry was even sent to Moscow to communicate the administration’s change in policy and to seek cooperation from the Russians on how to end Syria’s civil war.

“The United States and our partners are not seeking so-called regime change,” Kerry told reporters in the Russian capital after meeting Putin.

Assad has been accused by the West of massive human rights violations and chemical weapons attacks against his own people, and is a major ally to Iran in the region.

But after a day of discussions with Putin, Assad’s key international backer, Kerry said the focus now is “not on our differences about what can or cannot be done immediately about Assad.”

Kerry’s declarations crystallized what critics call a weak U.S. policy on Assad over the last several months, as the Islamic State group’s growing influence in the Middle East has taken priority.

Obama first called on Assad to leave power in the summer of 2011, with “Assad must go” being a consistent rallying cry.

Russia, by contrast, has remained consistent in its view that no foreign government could demand Assad’s departure and that Syrians would have to negotiate matters of leadership among themselves. Since late September, it has been bombing terrorist and rebel targets in Syria as part of what the West says is an effort to prop up Assad’s government.