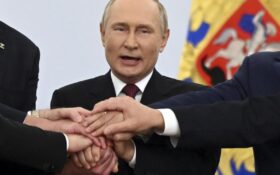 Russia’s dictator Vladimir Putin got an unusual gift for his 70th birthday on Friday: a tractor.

As the leaders of several ex-Soviet nations met at the Czarist-era Konstantin Palace in St. Petersburg, President Alexander Lukashenko of Belarus presented Putin with a gift certificate for the vehicle. Tractors have been the pride of Belarusian industry since Soviet times.

Lukashenko, like Putin, is an autocratic leader. He’s ruled the ex-Soviet nation with an iron hand for nearly three decades while cultivating a man-of-the-people image. In fact, he just reporters he used a model in his garden similar to the one he gifted Putin, according to the Associated Press.

It wasn’t clear how the Russian leader responded to the gift, which Lukashenko’s office revealed.

Putin didn’t mention the gift in televised remarks at the start of the meeting when he talked about the need to discuss ways of settling conflicts between ex-Soviet nations.

He also emphasized the need to exchange information to fight terrorism, illegal drugs and other crime.

The leaders of the Commonwealth of Independent States, a loose alliance of ex-Soviet nations, have another gathering to attend next week in Kazakhstan’s capital of Astana.