Punkin’ Chunkin’ to return to Delaware - The Horn News 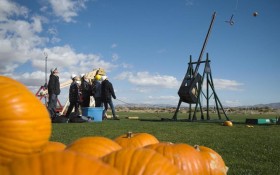 After a two-year absence, a pumpkin-flinging contest could be coming back to the Delmarva Peninsula this year.

Organizers of the World Championship Punkin Chunkin hope to hold the event in Delaware’s Sussex County but are considering locations across Delmarva, including Maryland’s Worcester and Dorchester counties. The event began in Lewes in 1986.

Punkin Chunkin Association President Frank Payton says a location for the contest could be picked by the end of March. The competition, in which contestants launch pumpkins with a variety of homemade contraptions, is expected to be held from Nov. 4 to Nov. 6.

The Punkin Chunkin began in Sussex County in 1986, but it has not been held since 2013 because of insurance and liability issues.

Payton says organizers have secured insurance for this year’s event.