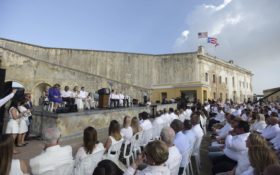 Clapping and raising their hands to the sky, hundreds of people clad in white gathered at an 18th-century fort in the Puerto Rican capital on Thursday to remember the thousands who died in the aftermath of Hurricane Maria as the U.S. territory struggles to recover one year after the Category 4 storm hit.

Religious leaders and government officials recalled how Puerto Rico was ravaged by the storm that killed an estimated 2,975 people and caused more than an estimated $100 billion in damage.

“After that catastrophic experience, we acknowledge how complex and difficult it is to prepare for a hurricane of that magnitude and fury,” Rosello said. “The best tribute we can give these people, these brothers that we’ve lost, is to build a better Puerto Rico for their sons, their grandsons and their families.”

While the U.S. government has invested billions of dollars to help clean up and repair the U.S. territory, much work remains. Major power outages are still being reported, tens of thousands of insurance claims are still pending and nearly 60,000 homes still have temporary roofs unable to withstand a Category 1 hurricane.

“I think it’s inexplicable,” Kumi Naidoo, Amnesty International’s secretary general, told The Associated Press during a visit to the island Thursday. “There’s no justifiable reason I can see for this gross level of negligence.”

Across the island, people marked the one-year anniversary with gatherings large and small, solemn and anger-tinged — and at times, even hopeful.

In the coastal fishing and farming village of Yabucoa, the strains of one of Puerto Rico’s most beloved songs filled the air at 6:15 a.m., the exact moment the storm made landfall there one year ago.

Tarps still covered many homes that have yet to be rebuilt in the town of 37,000, even as the nostalgic strains of “Amanecer Borincano” — “Puerto Rican Dawn” — resonated at the spot where Maria first unleashed its fury.

“I am the light of the morning that illuminates new paths,” a choir sang as dozens of local officials and residents gathered there. “I am the son of palm trees, of fields and rivers.”

In San Juan, the crowd of worshippers gathered at the 230-year-old San Cristobal fort sang and prayed along with pastors and musicians on stage, with music echoing through the fort’s heavy walls as the sun slowly sank into the sea behind them.

Pastor Elder Gonzalez said he and other volunteers who flew to Puerto Rico after the hurricane to help were shocked at what he saw from up high.

“To see the island of enchantment was a deep and painful experience,” he said. “No one on the plane said a word.”

Government officials argue that many changes have been made to better prepare Puerto Rico for future storms, but they acknowledge that significant obstacles remain.

Jose Ortiz, director of Puerto Rico’s Electric Power Authority, told reporters that 20 percent of repairs made to the power grid need to be redone. He said crews didn’t have access to the best materials at the time or were forced to rely on temporary fixes, such as using trees as makeshift power polls after Maria destroyed up to 75 percent of transmission lines.

In addition, municipal officials have complained that reconstruction efforts are too slow. Ariel Soto, assistant to the mayor of the mountain town of Morovis, said that 220 families there remain without a proper roof.

“We’re still waiting for help,” he said. “This hit us hard.”

In San Juan, among those still living under a blue tarp during the peak of hurricane season was Sixta Gladys Pena, a 72-year-old community leader.

“You worry, because you think it’s going to fly off like it did before,” she said. “We’ve lost an entire year and nothing has been resolved. You feel powerless.”

On Thursday, Ben Carson, secretary of the U.S. Department of Housing and Urban Development, announced in San Juan that $1.5 billion was being released to Puerto Rico as part of the overall $20 billion pledged for rebuilding, the largest in the agency’s history.

Officials said the priority is to help people still living under tarps, as well as those in low- and middle-income housing. The money will be used to repair and rebuild homes, relocate people and help them obtain property titles if needed.

“The path forward is challenging and will be measured not in months, but really in years,” Carson said.

On Thursday, President Donald Trump issued a one-sentence statement on the one-year anniversary of Maria. “We stand with Puerto Rico, and we are helping them to rebuild stronger and better than ever before,” it said.