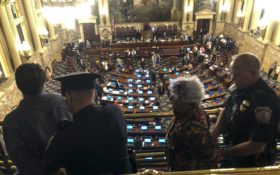 Demonstrators chanted “stop taking bribes” and threw dollar bills from a balcony in Pennsylvania’s House chamber Monday as part of a protest over state law that does not limit the value of gifts that lawmakers may accept from lobbyists and others.

Capitol police officers led the demonstrators out shortly after they began chanting in the House gallery, several stories above the chamber floor, as lawmakers and staff looked on.

They briefly interrupted the start of the House’s session, threw dollar bills bearing the word “bribe” in big black letters and unfurled a banner over the brass railing that read, “Some are guilty, all are responsible.”

It is the third episode in two years that demonstrators from March on Harrisburg have been arrested while protesting the state’s policy on gifts to lawmakers.

Democratic Gov. Tom Wolf has banned gifts to executive branch employees under his authority, and has repeatedly pushed the Republican-controlled Legislature to do the same.

“There’s no doubt that I’ll support it, I’m a definite yes,” Turzai told them during a separate demonstration outside the Capitol.

However, he stopped short of guaranteeing that it would pass the House or even emerge from committee.

Most other states have laws limiting the extent of gifts that lawmakers may accept, according to the National Conference on State Legislatures.

Lobbyists and other groups in Pennsylvania routinely give lawmakers free meals, travel and tickets to expensive sporting or entertainment events to lawmakers.

All told, 17 demonstrators were arrested on Monday, including eight in the House chamber and nine in a separate demonstration that blocked the rear Capitol entrance, a Capitol Police spokesman said.

All were given a citation for disorderly conduct and released, except for two who were taken to a county booking center because of warrants for previous protest-related arrests, police spokesman Stephen Rudman said.

March on Harrisburg spokeswoman Emmie DiCicco said 20 were arrested and the two taken to booking were expected to face misdemeanor charges.

DiCicco said the group is targeting the House because it believes there’s a better chance of getting legislation through the chamber. The Senate has a separate gift-ban bill pending in committee.

Both chambers approved an internal chamber rule banning most types of cash gifts to members in 2014 following allegations that some state representatives had accepted cash from a confidential informant in a criminal investigation.