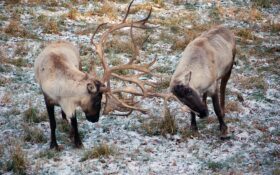 Protesters in Alaska carrying a banner and a caribou heart interrupted a campaign event for a U.S. senator seeking reelection.

The small group of protesters were restrained and escorted out by staff and attendees at Republican Sen. Dan Sullivan’s campaign launch event in a hangar near Ted Stevens Anchorage International Airport Saturday, The Anchorage Daily News reports.

Kathleen Bonnar said she approached Sullivan while carrying the caribou heart to the stage in a handbag.

She was accompanied by another woman, later identified as Crystal Berwick.

A video posted online showed Sullivan’s campaign manager, Matt Shuckerow, restraining Bonnar. The animal heart slipped from her hands onto the floor, leaving blood on Shuckerow and the stage.

At least two other women carrying a banner reading “Heartless Sullivan” attempted to rush the stage during the confrontation but were also pulled outside.

Bonnar said the heart fell from her hands when her arms were grabbed, which is why there may have been the misperception she intended to throw it.

“I think things just got really blown way out of proportion. None of us had any intention to be violent at all. We didn’t even expect the response we received at all,” Bonnar said.

The action was “not a safe protest, it was not peaceful, it was in fact violent on the part of the protesters,” Shuckerow said.

The demonstrators issued a statement afterward saying they were “attempting to establish a dialogue about Sullivan’s record against Alaska Native interests.”

The statement, which said the group consisted of Alaska residents who were not connected to any organization or corporation, said the protest was peaceful and they plan to seek assault charges against those who ejected them.