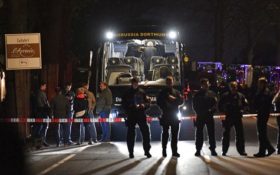 German prosecutors said Thursday that a 26-year-old Iraqi detained following an attack on a top soccer club is suspected of membership in the Islamic State group, but so far there is no evidence he was involved in the explosions that injured a Borussia Dortmund player and a police officer.

The hunt for the bomber was continuing.

Federal prosecutors said the Iraqi — identified only as Abdul Beset A. in line with German privacy laws — allegedly joined IS in Iraq by late 2014 and led a unit of about 10 fighters involved in preparing kidnappings, extortions and killings.

He traveled to Turkey in March 2015 and remained in contact with members of IS after arriving in Germany in early 2016, prosecutors said.

However, “so far the investigation has turned up no evidence that the suspect participated in the attack,” they said in a statement.

A judge will decide Thursday on whether to keep A. in investigative detention, as requested by prosecutors.

The man was arrested Wednesday, a day after three explosions shattered a window of the Borussia Dortmund bus as it was heading from the team’s hotel to the stadium for a Champions League match against AS Monaco.

Investigators said three copies of a note claiming responsibility for the attack were found at the scene, but are puzzling over the style and contents of the letter.

The note contains phrases suggesting an Islamist motive, with calls for Germany to withdraw reconnaissance jets that are assisting the fight against the Islamic State group, and for the closure of the U.S. Ramstein Air Base in Germany.

Experts say the letter’s mix of correct, complicated German and obvious mistakes raises the possibility that it is a red herring intended to place blame on Islamic extremists.

Police say the metal-packed devices used in the attack were sophisticated and would have required detailed knowledge of explosives and detonators, suggesting possible military training.