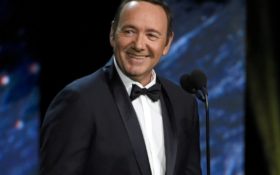 Sheriff’s investigators presented the allegations on April 5 to the district attorney’s task force on sex crimes in the entertainment industry, a sheriff’s statement said.

District attorney’s spokesman Greg Risling confirmed that he case was under consideration by prosecutors.

A man alleges that Spacey sexually assaulted him in West Hollywood in October of 1992, the sheriff’s statement said.

Investigators from the department’s Special Victims Bureau began an investigation in December, a few weeks after the actor was first publicly accused of sexual misconduct by actor Anthony Rapp.

No further details about the investigation were provided.

British media have reported that Spacey, 58, is also under police investigation for sexual assault in London.

The Academy Award winner was first publicly accused of sexual misconduct in October. He quickly lost roles in the film “All the Money in the World” and the TV show “House of Cards,” and future projects were shelved.

Spacey apologized to Rapp and his former publicist said he was seeking unspecified treatment.