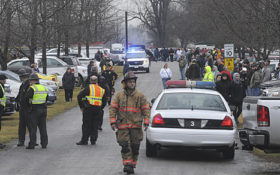 An Ohio prosecutor says he will ask that a school shooting case be moved to the adult criminal justice system.

Authorities say a 17-year-old shooter fired a 12-gauge shotgun in the Friday morning attack at a high school in West Liberty, 45 miles northwest of Columbus.

Two students were wounded, one critically.

The suspect was initially held in a juvenile center on a charge of felonious assault.

Talebi says moving the case to common pleas court is appropriate because of the nature of the charges and also for the safety of the community.