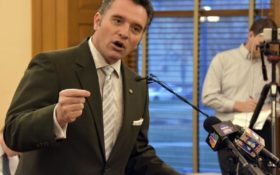 Kansas schools that refuse to allow teachers to carry guns could be held legally responsible in the event of a tragedy under a proposal drafted after last month’s mass shooting at a Florida high school.

Opponents of the measure, which got its first hearing Tuesday in front of the House Insurance Committee, expressed concern it could effectively mandate arming teachers rather than allowing it, as several states have done.

“It would certainly open the door for that conversation,” said Democratic Rep. Brett Parker, an Overland Park school teacher. “The further we go down this rabbit hole, the more chance there is for even more obnoxious legislation moving forward.”

Even if that provision is stripped, as some advocates suggested during the hearing, the bill would prohibit insurers from denying coverage to a school because it lets its teachers or staff members carry weapons.

At least nine other states have provisions in place giving teachers the option of carrying guns in schools, but the Kansas plan seems to go further than most other laws in place or under consideration.

The proposal is separate from one embraced by Republican leaders in the House that focuses on improving school infrastructure instead of arming staff. That measure, which appears to have broader support, won first-round approval on Tuesday.

Rep. Blake Carpenter, a conservative Derby Republican who helped write the legislation that holds schools liable, said he is confident armed and trained teachers will save lives. Police could be minutes away, and in smaller districts where modest funding means school-resource officers aren’t hired, the bill would allow for “next best thing,” he told the committee.

“It is not, if our kids will be killed. It is, when will they be killed and what are we doing to prevent it?” Carpenter said.

Gun control advocates say the portion that presumes negligence against school districts is highly unusual and seems to match closely with concealed carry laws typically applied to businesses in some states, and not schools.

Kansas law has allowed teachers to carry concealed guns since 2013 but school districts across the state have disallowed the practice after EMC Insurance Companies, the state’s primary school insurer, refused to provide coverage to schools with armed staff.

Kansas Association of School Boards lobbyist Mark Tallman opposed the bill. He said insurance providers could still choose to deny coverage, yet schools would have no choice but to allow staff to arm themselves regardless. Even if an insurer is willing to provide under such circumstances, Tallman said, the rates would become very expensive.

Carpenter said for an insurance company to increase rates or to outright refuse to provide coverage to a school, it would have to prove that having an armed staff creates a higher risk environment.

According to the State Department of Education, the 286 local school districts expect to spend $23.7 million on insurance in the current school year, not including health insurance. No testimony provided during the hearing predicted what that expense would become if the legislation passes.

Parker said he has received 284 pieces of written testimony opposing the bill, much of it from teachers unhappy with the prospect of being armed and working alongside others who may or may not be.

“We’re inventing new ways, it seems, to drive people out of the teaching profession in Kansas,” Parker said.