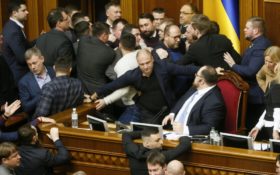 Ukraine’s parliament is debating a proposed law to allow sales of the country’s rich farmland, a high-tension issue that sparked a brawl among lawmakers Thursday.

Proponents say that allowing sales of farmland that are currently outlawed would significantly boost Ukraine’s struggling economy. Opponents argue the land could end up in the hands of businesses that would crush small farmers or of foreigners, including Russians.

President Volodymyr Zelenskiy, who supports land sales, says the question of allowing foreign ownership should be put to a referendum.

Hundreds of protesters gathered outside the parliament building during the debate. Inside the chamber, supporters of opposition leader Yulia Tymoshenko blocked the area at the front while she occupied the speaker’s seat. The confrontation ended in a scuffle.

About 75% of Ukraine’s farmland belongs to small landowners who can lease it but not sell it. The rest is owned by the state.

Debate of the measure is likely to be lengthy because lawmakers have proposed some 4000 amendments to it.