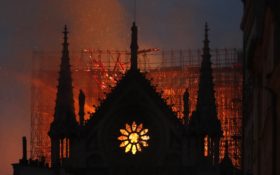 Easter Sunday, three Christian churches in Sri Lanka were blown up in a slew of coordinated Islamic suicide bombings, which included hotels and homes in Christian neighborhoods. Nearly 300 people were killed, including 45 children, and at least 500 were injured.

The terrorists struck during joy-filled Easter services, intending to kill as many Christians as possible.

But this Easter bloodbath was not a local phenomenon.

The Horn News talked with Raymond Ibrahim, a Coptic/Islamic relations expert who has briefed the U.S. Strategic Command, the Defense Intelligence Agency, Congress, and other government agencies. Ibrahim told us the Sri Lanka slaughter is just the most recent of a 1400-year history of Islamic terror.

“Whether in Sri Lanka or Egypt or France, Islamic attacks on churches is a phenomenon that not only crosses continents but centuries as well,” the Library of Congress Arabic language and Middle East regional specialist explained.

And in recent years, the rate of murderous attacks against Christians has been increasing, too.

The Sri Lanka suicide bombers belonged to a local radical Islamic terror group known by the Sri Lanka government to advocate violence against Christians. Sri Lankan military intelligence was even warned by peaceful Muslim officials that the terrorists believed they “have to kill…in the name of religion.”

Sri Lanka Health Minister Rajitha Senaratne noted evidence which proved “there was an international network without which these attacks could not have succeeded.”

The leader of ISIS, Abu Bakr al-Baghdadi, praised the massacre as serving “Allah.” His media front, “Amaq” called the suicide bombers “Islamic State fighters” and admitted the slaughter was intentionally committed on “the infidel holiday.”

Having been effectively defeated by an international coalition led by the Trump administration, a landless ISIS is using the internet to coordinate terror.

Unfortunately, the Sri Lanka religious “genocide,” as European Parliament Antonio Tajani called the bombings, is not surprising — or even unusual.

On Easter Sunday in 2016, Islamic terrorists bombed to death more than 70 people in Pakistan. Last May, Islamicists hit three churches in Indonesia, murdering 28 people. In January of this year, Islamic bombs decimated a cathedral in the Philippines, killing 20.

With the mass immigration of Syrian refugees and other unvetted refugees in Europe, hundreds of Christian churches have been destroyed, desecrated, or damaged in the past couple of years alone.

“There is a creeping war against everything that symbolizes Christianity,” noted German PI News, which documented 1,063 attacks on Christian churches in 2018.

German media admit the anti-Christian violence may be the result of unvetted migration from Islamic countries. In 2016, after an influx of a million immigrants from majority Muslim countries into Germany, a Dolmen newspaper reported that “not a day goes by” when attacks on Christian artifacts do not occur.

A January 2017 French study concluded that “Islamist” attacks against Christians rose by 38 percent in the country since the mass migration.

In the month of February 2019 alone, over ten European Catholic churches were desecrated or vandalized. Anglican Mainstream reports that two French churches are desecrated every single day. “Every day, at least two churches are profaned,” MP Valerie Boyer lamented.

Earlier this year, the Catholic News Agency decried arsonists igniting the 800-year-old Saint Alain Cathedral in Lavaur, where crosses and statues were torn down and disfigured. One day later, terrorists attacked a church in Nimes, desecrating the Eucharist and smearing shit on the sanctuary walls. In March of this year, the historic Church of St. Sulpice in Paris was set on fire just after midday mass.

And arson was initially the suspected cause of a recent blaze that leveled the Cathedral of Notre Dame in Paris. In 2016, police found a car linked to “radicalized” Muslim women loaded with at least six gas canisters near Notre Dame Cathedral. One woman was found guilty of inciting terrorist attacks in Syria and elsewhere.

Islamic terrorism ravages Eastern Europe as well. From the Martyr Elijah Church and Holy Prince Vladimir Church in Ukraine, to Holy Transfiguration Cathedral in Kiev, to Saint Mary Syrian Orthodox Church in Sweden, to churches in Bosnia Herzegovina and elsewhere.

“The desecration of churches has for centuries been a Muslim trademark –a sort of ‘Islam was here,’“ Ibrahim, author of “Sword and Scimitar: Fourteen Centuries of War between Islam and the West,” continued.

“Whenever Muslims invaded Christian nations, untold thousands of Christian churches were ritually desecrated and despoiled, their crosses and other Christian symbols systematically broken,” Ibrahim charged. “Think what ISIS does, but on an exponential level –and not for a handful of years but for over a millennium.”

After Bush, Obama bowed before the ultra-violent Muslim Brotherhood, and furthered Islamic propaganda globally. Secretary of State Hillary Clinton refused to even utter the words, “Islamic terrorism,” though she unreservedly vilified both conservatives and Christians.

After his church was attacked, Archbishop Philaret of Lvov and Galich reacted as Christians around the world have responded to Islamic terrorism for centuries. “Nothing has changed since the times of persecution against Christ,” he said. “Jesus Christ was persecuted yesterday, is persecuted today and will always be persecuted.”

But the Christian leader claims ultimate victory. “It is Christ Who was yesterday, is today and will be forever, while the names of the persecutors have disappeared from the face of the earth,” Archbishop Philaret concluded.

“Glory be to God for everything! We take His visitations with profound trust in God’s mercy!”