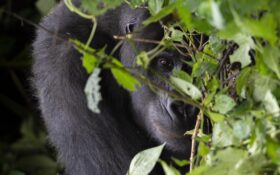 Decades of conservation efforts have stabilized the population of endangered mountain gorillas in eastern Africa. But the number of Grauer’s gorillas — a less furry, lower elevation-dwelling animal — has declined, largely due to habitat loss and hunting.

On Friday, the nonprofit Dian Fossey Gorilla Fund announced that more land in eastern Democratic Republic of Congo where Grauer’s gorillas live will fall under a community-protection initiative.

The critically endangered species has lost an estimated 60% of its population in the past two decades, and an estimated 3,800 to 6,800 individuals remain.

Most Grauer’s gorillas now live outside national parks, and protecting them will be difficult in a region facing sustained human conflicts. Their rainforest homes are being cleared for agriculture and mining, and the gorillas are sometimes hunted for food or trapped by snares intended to catch other animals.

A 2016 law allows communities in Congo to apply for rights to manage their traditional lands. The Fossey Fund has helped communities in eastern Congo complete that paperwork and entered into agreements with families to provide assistance and training for the sustainable management of their lands.

The community can decide what activities should be allowed on their lands, and to try to enforce those choices. The Fossey Fund provides education and funding.

Community members are trained and then hired “to conduct the science needed to monitor the biodiversity of the forest — biological inventories, gorilla tracking, plant biomass for estimating carbon capture,” said Urbain Ngobobo, director of the nonprofit’s Congo programs.

This model differs from the approach used to protect the mountain gorillas. They live almost exclusively within the boundaries of national parks in Rwanda, Uganda and Congo, allowing researchers to cooperate with park managers to protect the species.

Most Grauer’s gorillas don’t live inside national parks — and it’s not feasible to expand the parks to fully cover their habitats.

“Grauer’s gorillas exist exclusively in a country that has suffered really extreme degrees of instability for decades,” said Richard Bergl, a primatologist and director of conservation at the North Carolina Zoo.

“When there is violence happening, it’s very challenging to maintain the infrastructure of a national park,” he said. “But the communities will be there regardless of political instability. If you have their support, you have a chance.”

Community interests vary, but in general there is an incentive to protect their lands from being pillaged by outsiders, whether they’re illegal mining operators or commercial hunters, said Dirck Byler, vice chair of the great apes specialist group for the International Union for the Conservation of Nature, the scientific body that designates species as endangered.

“Most of these communities want to maintain their forests as they’ve been in the past,” used for subsistence hunting and plant harvesting, said Byler, who has worked extensively in Congo.

Community-based conservation schemes have been effective in slowing or reversing the decline of endangered species in other regions, such as the Nigerian mountains where cross river gorillas live and the savannah of northwestern Namibia where endangered rhinos live, Bergl said.

“The wildlife there would be gone if it weren’t for community involvement and management,” he said. “If we’re going to be successful, it’s going to be because of efforts to support the communities to manage their forests.”