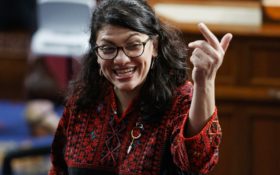 Rep. Rashida Tlaib, D-Mich., was humilated over the weekend — and after a string of recent defeats at the hands of President Donald Trump, this one is the worst.

Tlaib posted what she thought a harmless Passover celebration photo on Twitter.

It quickly blew up in her face.

“Tonight marks the beginning of Passover!” she wrote. “To all our Jewish sisters and brothers, Happy Pesach! I hope it is a time full of joy and love with family and friends.”

Tonight marks the beginning of Passover! To all our Jewish sisters and brothers, Happy Pesach! I hope it is a time full of joy and love with family and friends. pic.twitter.com/Ngs2OdIVrd

The graphic, which was likely found by an intern in a five-minute Google search, features pieces of leavened bread at the bottom.

Leavened bread is prohibited during Passover.

It’d be like wishing a Muslim, “Happy Ramadan” with a picture of bacon and sliced ham.

Social media was ruthless with it’s response of Tlaib’s so-called outreach. Critics said she was out of touch.

One person figured out that Talib’s office just grabbed the first picture they saw:

to be fair, it's the first image that comes up when you… um… Google "Happy Passover"… ????‍♂️https://t.co/M9qx5ZygtO pic.twitter.com/FEHLDMyjPp

Some responded in anger —

Seriously who the heck made a passover pic with bread and why does it seem so many people who claim to want to know somthing about us and claim to be allies… dont take ANY time to do the research and not mess this up? This is nice but like the labor party… u missed the mark

This is the personification of the growing rift between Democrats and Jewish-American voters.

Worse: Tlaib never bothered to take it down.

She doesn’t care? Or is she just following the lead of House Speaker Nancy Pelosi, D-Calif.?

Did they discuss how to end it… or how to get away with it?