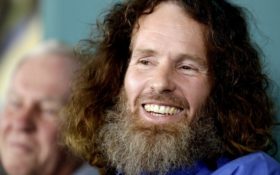 Two men released from Al-Qaeda captivity after six years in northern Mali made their first public appearances Thursday, recounting their ordeals and saying they were not clear whether any ransom was paid for their freedom.

“I think it’s wrong to pay ransoms,” 42-year-old Johan Gustafsson, who was freed in June, told reporters in Sweden. “I hope they let me out because they were tired of me.” Sweden has insisted it never paid any ransom and that his release was obtained through negotiations.

Gustafsson and 42-year-old Stephen McGown were the longest-held of a number of foreigners seized by Islamic extremists in Mali, where several armed groups roam the West African country’s north. The extremists have made a fortune over the last decade abducting foreigners in the vast Sahel region and demanding enormous ransoms for their release.

McGown told reporters in South Africa he didn’t know whether any ransom was paid for his release in late July. South Africa’s government has said it paid no ransom. He said he was well-treated during his long years in the desert, but “you always knew you were a prisoner.”

McGown also said he found out about his mother’s death just minutes before he arrived home in South Africa. His mother died in May.

Dutchman Sjaak Rijke also was seized with Gustafsson and McGown in Timbuktu but was rescued by French forces in April 2015. A fellow German traveler was killed during the kidnapping.

The founder of the South African aid organization Gift of the Givers Foundation, which helped mediate McGown’s release, said he didn’t know whether any ransom was paid or any prisoners exchanged for the men’s release. But Imtiaz Sooliman said the extremists’ initial demands started at 10 million euros per captive.

When asked how they coped during their long years in the desert with their captors, Gustafsson said he converted to Islam “to save my life.” He said fleeing the extremists had been “out of the question.” He had been on a motorcycle tour of Africa when he was seized.

McGown, who said he also converted to Islam, said his captors gave him clothes, food and medication.

“I did my best to see the best in a bad situation,” he said. He described how he learned some Arabic to communicate and said he watched birds migrate “backwards and forwards” across the vast Sahara.