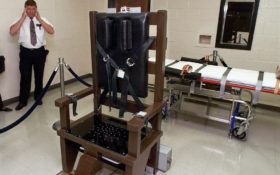 A Tennessee inmate has chosen the electric chair for his scheduled execution next month, opting like four other inmates in little more than a year for electrocution over the state’s preferred execution method of lethal injection.

Nicholas Sutton, 58, is scheduled to be put to death Feb. 20 for the stabbing death of a fellow inmate decades ago while serving a life sentence for his grandmother’s slaying. An affidavit signed on Tuesday said he waives the right to be executed by lethal injection and chooses electrocution.

Tennessee is one of six states where condemned inmates can choose the chair, but it’s the only state where they’re actually doing so. They have argued unsuccessfully in court that the way Tennessee carries out lethal injection results in a prolonged and agonizing death.

Expert witnesses have testified that midazolam, which is used to render the inmates unconscious, wouldn’t prevent them from feeling pain and that Tennessee’s three-drug combination would cause them sensations of drowning, suffocation and chemical burning while being unable to move or call out.

Faced with that possibility, Edmund Zagorski in November 2018 became only the second Tennessee inmate since 1960 to opt for the electric chair. His electrocution, and the following two, seemed to be carried out without problems. But when Lee Hall was electrocuted in December 2019, witnesses said they saw a small plume of white smoke above the right side of his head. A Tennessee Department of Correction spokeswoman later said it was “steam, and not smoke, as a result of the liquid and heat.” An autopsy has not yet been completed.

The electric chair began to fall out of favor in the 1990s after witnesses reported smoke and flames shooting from the head of a condemned inmate in Florida. A U.S. Supreme Court challenge was dropped after the state switched to lethal injection, but state courts in Georgia and Nebraska have declared the electric chair unconstitutional. No state currently uses the electric chair as its main execution method. Virginia is the only state apart from Tennessee to use the chair this decade and hasn’t done so since 2013.

Sutton was sentenced to death in 1985 for stabbing fellow inmate Carl Estep after a confrontation over a drug deal. Sutton was 23 at the time and imprisoned for killing his grandmother when he was 18. He had also been convicted of murdering two men in North Carolina when he was 18.

In a clemency petition sent last week to Tennessee Gov. Bill Lee, Sutton’s attorneys argue Sutton transformed himself in prison from a killer to someone who saved the lives of prison employees and fellow inmates.

Lee has not said how he will respond to the petition.