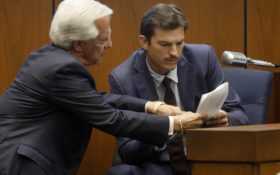 A West Virginia principal accused of plagiarizing Ashton Kutcher in an address to his school’s graduating class says he didn’t mean to use someone else’s work.

Parkersburg High School Principal Kenny DeMoss has issued a statement saying he should have cited his sources in the May 23 speech, but asserted the ideas were his own.

“I did not get all my ideas from Ashton. Format yes, thoughts and ideas were from my heart,” he wrote, adding that he’s upset the speech has stolen the focus from graduating students.

A graduate posted a video to Facebook that spliced DeMoss’ speech with Kutcher’s 2013 Nickelodeon Teen Choice Awards speech and has since amassed more than 100,000 views. The speeches used similar wording and at times featured identical phrasing.

DeMoss said the widely-circulated video cut out a preface that was supposed to make clear he was going to be folding others’ ideas and thoughts into his speech.

In an email Friday, DeMoss said he’s putting the incident behind him.

“Me and my family are the only ones being hurt here. My accuser isn’t. I love kids and love this school and this will only make me better,” he said.