Prince Louis no longer a baby? - The Horn News 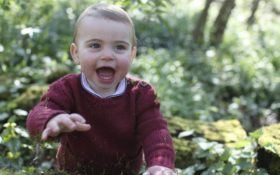 The youngest child of Britain’s Prince William and his wife, Kate, is about to celebrate his first birthday.

Prince Louis will mark the milestone on Tuesday.

Louis is a great-grandson of Queen Elizabeth II, who turned 93 on Sunday.

He has largely been kept out of the public eye since he was born.