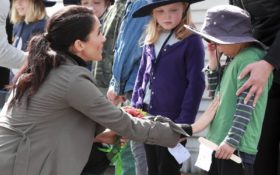 Prince Harry and wife Meghan spoke with people working in the mental-health field and encountered a flightless native bird as they continued their tour of New Zealand on Monday.

The Duke and Duchess of Sussex are on the last leg of a 16-day tour of the South Pacific. They began their second day in New Zealand by visiting the Maranui Cafe on the Wellington coast, where they spoke to people offering mental-health support through helplines, social media and other programs.

Prince Harry last year spoke out about his own struggles with mental health, telling the Daily Telegraph newspaper that he’d sought counselling after years of suppressing his emotions following the death of his mother Diana, the Princess of Wales, in a car crash when Harry was 12.

At the cafe, Harry talked about the need to remove the stigma from mental health and to encourage people to talk about how they feel.

“Everyone needs someone to turn to, right?” he said.

The couple then took a helicopter to the Abel Tasman National Park on the South Island where it was raining as they were welcomed by an indigenous Maori tribe. Harry told them the forecast had been for even worse weather.

“From my wife, myself and our little bump, it’s a blessing to be here,” Harry said, making reference to Meghan being four months pregnant.

The couple strolled along on a sandy beach and came across a weka bird, with a ranger saying that they’re New Zealand’s version of a monkey because they’re very cheeky.

New Zealand is home to a number of flightless birds, the most famous being the kiwi. The couple is due to visit a kiwi hatchery later on their trip.

The couple also plans to meet young people training to be part of the film industry and go on public walkabouts in Auckland and Rotorua before leaving on Wednesday.

The couple earlier visited Australia, Fiji and Tonga on their tour.