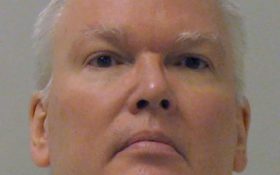 A Michigan priest accused of wrapping a teenager in bubble wrap was sentenced Monday to 60 days in jail for attempted false imprisonment.

The Rev. Brian Stanley appeared in Allegan County court, two months after pleading guilty in a deal with the attorney general’s office. He was initially charged with false imprisonment.

Stanley was accused of wrapping a boy in bubble wrap and tape in 2013 in a janitor’s room at St. Margaret Church. The boy’s eyes and mouth were also covered while he was left alone for an hour, according to the attorney general’s office.

Stanley was supposed to be counseling the boy.

“Mr. Stanley took advantage of a vulnerable victim and today he is being held accountable,” Attorney General Dana Nessel said.

The priest did not speak in court but has expressed regret about his actions, defense attorney Michael Hills told The Associated Press.

“After this incident in 2013, he was in treatment,” Hills said. “After treatment, I think he realized perhaps he was projecting trauma that he had suffered in his life onto others.”

Stanley’s conduct was “sexually motivated,” the attorney general’s office claimed, and he will be placed on a public registry for 15 years.

“There’s a big dispute about that,” Hills said. “There is no evidence about it. I objected to Father Stanley being placed on the registry, although under the statute it’s required regardless of whether criminal sexual conduct is alleged.”

The case against Stanley began when investigators looked at documents held by the Catholic Diocese in Kalamazoo. The diocese has said it twice reported allegations about Stanley to police departments in 2013 and 2017 but no charges were filed.

“We continue to review information seized from all seven Michigan dioceses in 2018, and we will thoroughly evaluate accusations and complaints brought forth by victims,” Nessel said.