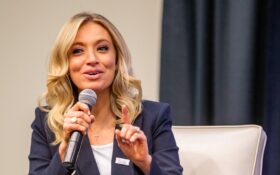 White House Press Secretary Kayleigh McEnany has quickly made a name for herself as a straight talker with a sharp tongue — and she can end televised press briefings with a mic drop moment.

To conclude the press briefing, McEnany went after Obama for his alleged role in the Deep State attempt to sabotage President Donald Trump’s White House.

And she also responded to whether or not Obama was under investigation.

” …  I don’t have any updates on that front because that’s currently a DOJ matter,” she said after being questioned a media member.

She may not have given detail on a potential investigation, but McEnany didn’t stop there.

She unleashed a scathing takedown of both the former president and his political allies.

McEnany rattled off the names of Obama’s cronies who boasted about Russia collusion to the mainstream media, but when under oath admitted they saw no evidence of collusion between Russia and Trump.

“So it brings the question to light,” McEnany said. “Why then did we have many years of investigating collusion that these Obama administration officials never existed, they never saw any evidence of, but for three years the American people were dragged through the mud and told that their choice for the President of the United States might have been a Russian asset based on no evidence at all.”

“This president was exonerated by the Mueller Report and there are some real questions for these individuals who were saying one thing publicly and another thing privately,” she added.

And it turns out that real questions could indeed be lingering around for Obama.

You can watch the epic takedown below:

"For 3 years the American people were dragged thru the mud & told their choice for the President of the U.S. might have been a russian asset, based on no evidence at all." pic.twitter.com/v32wzaBBnn