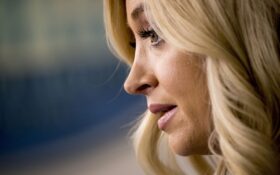 He summoned her, after all — to be his fourth White House press secretary and to his side last week at the steps of St. John’s Church after the military forcefully cleared away peaceful protesters. Everything around them spoke of faith and the nation’s suffering: the boarded-up “church of presidents” and the Bible in Trump’s hand. The pepper spray in the air. The crucifix, peeking out from McEnany’s collar.

But Trump did not speak of spirituality or the health and racial crises wracking the country he leads. He instead promised that “the greatest country in the world” would come back on his watch. At Trump’s left, McEnany gave a nod and did not budge until he did, confirming that while she’s got a new title, she serves a familiar role as Trump’s most visible political advocate.

“In past White Houses, it was possible to reliably distinguish the transcript of a statement by the White House press secretary from that of the spokesperson for that president’s reelection campaign,” said Kathleen Hall Jamieson, director of the Annenberg Public Policy Center at the University of Pennsylvania. “It is increasingly difficult to do so.”

With poise and preparation, McEnany has made clear from her first briefing that she’s willing to defend her boss’s view of himself. In exchange, she frequently cites her proximity to the president — the coin of the realm in Washington — as evidence that she can speak credibly to his thinking and intent.

“I’m around the president,” she told reporters last month. “His intent is always to give truthful information to the American people.”

And to punch back. When his photo op at St. John’s Church generated condemnations even from some Republicans, Trump rumbled on Twitter that his critics “got it wrong!”

“People liked my walk to this historic place of worship!” he tweeted in part.

A day later, McEnany filled in the “why.” It was, McEnany suggested, a “leadership moment” akin to Winston Churchill’s famed inspections of bomb-damaged London during World War II.

“Like Churchill, we saw him inspecting the bombing damage and it sent a powerful message of leadership to the British people,” she said. Trump holding up the Bible, she added, “was a very important symbol for the American people to see that we will get through this, through unity and through faith.”

The Churchillian comparison elicited some ridicule.

The separation between White House press secretary and campaign spokesperson is traditionally rooted in the idea that taxpayers should not pay the salary of a political advocate. In fact, all White House press secretaries tell the president’s story in the most advantageous way possible, including by “telling the truth slowly,” as Mike McCurry, President Bill Clinton’s spokesman, wryly described the job. For presidents, there’s always a reelection at stake — if not theirs, then their allies’ on Capitol Hill and elsewhere.

But the truth is always presumed to be part of the press secretary’s message.

“As White House press secretary you’re going to spin, you’re going to present the president in the best possible light, you’re going to kick aside questions that you don’t want to answer,” McCurry said in an interview. “But at the same time, people have to have some reliance that they’re getting accurate information when it really counts.”

During a testy exchange with reporters last month over the president’s false claims about voter fraud, McEnany also showed how she’s polished up and systemized Trump’s fondness for casting himself as a victim of a hostile and biased media. And she’s added new dimension to the subject-changing practice known as “whataboutism.”

Asked about Twitter’s move to fact check the president’s tweets, McEnany flipped through her briefing book and recited prepared examples of mistakes made by prominent news outlets.

“So if anyone needs to be fact-checked,” McEnany concluded, “I think it should be the media.”

McEnany, 32, is an alumnus of Catholic school in Tampa, Florida, the University of Miami and Harvard Law Schools, and was a familiar face on CNN as a conservative commentator. She’s also an author. The dedication of her 2018 book, “The New American Revolution: The Making of a Populist Movement,” reveals another influence: the Columbine High School massacre in 1999.

The book is dedicated in part to Rachel Scott, a Christian and the first person murdered there. In the dedication, McEnany thanks Scott for “making the faith my parents had taught me real in my own life.” She also writes of the effect that images from Columbine had on her, at age 11: “It was the day that I saw evil and realized that it was alive in the world.”

McEnany’s approach has won plaudits from the president and his staff, according to three aides and Republicans close to the White House who spoke on condition to discuss internal matters.

She and communications director Alyssa Farah were brought in by new chief of staff Mark Meadows, who wanted to bolster the press shop after it flagged under press secretary Stephanie Grisham.

Trump signed off, having admired McEnany’s work on TV and for his reelection campaign. The president was eager for a more robust press operation to defend him. With her camera-ready appearance, McEnany has told aides that she wanted to both defend Trump on TV and also emulate the tenure of Sarah Sanders, who had close access to the president and became one of his most trusted advisers.

McEnany meets with the president more than a dozen times a day. Some White House officials believe that McEnany has a strong feel for the president’s base and, unlike others who have worked in the West Wing, does not try to reshape Trump into a more conventional chief executive.

McEnany also keeps an eye on the politics. For example, Trump initially signaled his support for Georgia reopening its economy in April — only to be talked out of it by Dr. Deborah Birx, the coronavirus task force coordinator. When Trump prepared to brief the press a short time later, McEnany urged him to be tough on Georgia, saying he did not want to be associated with any rise in infections, according to one of the officials.

Aides have pointed out that she is trying to improve the responsiveness of the press shop but also sees the job — and particularly the briefings — as an attempt to go on offense. That means not just pushing the White House perspective, but also at times criticizing news coverage and individual reporters.

McEnany declined to comment. But Meadows sang her praises.

“No one is ever better prepared to handle a wide range of questions at any given time,” he said.