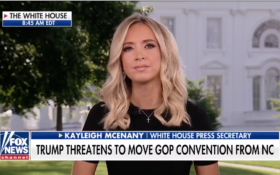 President Donald Trump made a name for himself with his unconventional brand of politics.

So it’s no wonder his newest Press Secretary Kayleigh McEnany is fitting right in –– and her direct warning to Fox News star Chris Wallace is proof that she won’t tolerate media spin.

Perhaps just like Trump, McEnany has found Wallace unreliable — and what she said quickly went viral.

The exchange began when Wallace used a segment to complain about McEnany’s attitude toward the mainstream media. Wallace even threatened her, saying that if he were a reporter at the White House briefing, things “would not have gone well” for McEnany.

But McEnany had choice words in response to Wallace:

“Journalists are not above being questioned themselves,” she responded.

A most recent press briefing saw McEnany bombarded with veiled criticisms and scrutiny of the Trump administration –– and the press secretary pushed back on reporters, questioning their motives.

Of all the questions, none of them were about former National Security Advisor Michael Flynn’s exoneration, the Deep State unmasking, or former President Barack Obama’s so-called “Obamagate” controversy.

So she turned the tables on the media and proposed the questions herself.

You can see the scathing retort below:

When asked about Wallace’s criticism of her tactics on “Fox & Friends,” McEnany was ready.

“Journalism is a great and noble profession but there’s been a dearth of journalists asking the real questions for President Obama, the criminal leak of Michael Flynn’s identity, who leaked that identity, the dossier used to launch a three year investigation into this president to spy on his campaign why aren’t those questions being asked?” she said.

“It’s journalistic malpractice not to ask those questions,” McEnany added.

Wallace, like many others in the media, are uncomfortable with how McEnany pushes back on reporters at the White House press briefings. The rising star is making it clear that she will not be bullied into submission.

The press secretary position has become a well-storied appointment, most notable for reporters unfairly lambasting whoever is at the podium, whether it was Sean Spicer or Sarah Huckabee Sanders.

Those who have come before McEnany have spoken up, but none have spoken out quite like the rising star.