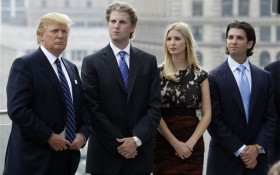 The level of disrespect for President Donald Trump, his family, and his administration has reached an all-new level of ugliness.

Tuesday night, the president’s son, Eric Trump, says he was spat on in a Chicago cocktail lounge by a protester.

Eyewitnesses confirmed the report and say it was an employee working at the lounge.

Breitbart reported that Trump was approached by this stranger — and the woman spat right in his face.

The woman was immediately taken into custody by Secret Service agents but was shortly released after Eric Trump decided against pressing charges.

The disgusting incident was first reported by Mary Ann Ahern of NBC 5 Chicago, who caught the tail end of the account on Twitter:

Hearing of incident at Aviary tonight, an employee allegedly spit on son of @realDonaldTrump who is visiting Chicago, offender now in US Secret Service custody

Police presence outside Aviary after alleged incident between an employee and Eric Trump around 8:30pm pic.twitter.com/1oIiVfsiKj

“It was purely a disgusting act by somebody who clearly has emotional problems,” Eric Trump told Breitbart. “For a party that preaches tolerance, this once again demonstrates they have very little civility. When somebody is sick enough to resort to spitting on someone, it just emphasizes a sickness and desperation and the fact that we’re winning.”

Democrats don’t want any part of that.

And they’ve proven it repeatedly:

When Sen. Ted Cruz, R-T.X. and his wife were mobbed out of a restaurant.

When White House aide Kellyanne Conway was attacked in front of her children.

When former Homeland Security Secretary Kirstjen Nielsen was accosted at a Mexican restaurant.

And now, when a woman did perhaps the most disrespectful thing you could do — spit in the face of a politician’s child.