The President of the United States of America - The Horn News 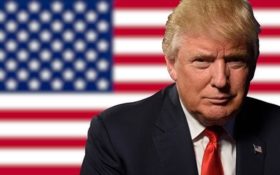 On a chilly Friday in Washington, D.C. it was made official — The President of the United States of America for the next four years is Donald J. Trump.

And in his first speech as the 45th president, Trump wowed the massive crowd.

Looking out over the hundreds of thousands of Americans spread across the National Mall, Trump painted an optimistic picture of America’s future in his first speech as commander in chief. Pledging to empower America’s “forgotten men and women, the president’s comments were well-received by the supportive crowd.

The massive gathering of flag-waving Americans cheered when the president vowed to stir “new national pride,” bring jobs back to the United States, and “eradicate completely” radical Islamic terrorism.

In a remarkable scene, Trump ripped into Washington’s longtime leaders as he stood among them at the U.S. Capitol. For too long, he said, “a small group in our nation’s Capital has reaped the rewards of government while the people have borne the cost.”

“To all Americans in every city near and far, small and large from mountain to mountain, from ocean to ocean, hear these words: You will never be ignored again,” he said.

Trump was sworn in by Chief Justice John Roberts, reciting the 35-word oath with his hand placed upon two Bibles, one used by his family and another during President Abraham Lincoln’s inauguration.

Trump and wife, Melania, bid Obama and outgoing first lady Michelle Obama farewell as they departed the Capitol grounds in a government helicopter.

In a show of solidarity, all of the living American presidents attended the swearing-in ceremony, except for 92-year-old George H.W. Bush, who was hospitalized this week with pneumonia. His wife, Barbara, was also admitted to the hospital after falling ill.