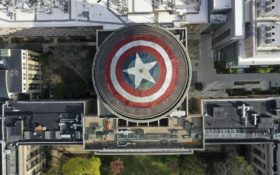 The shield went up Saturday night and was taken down Monday morning.

MIT students have for generations centered similar pranks, which they call “hacks,” on the dome.

Raymond Huffman, a 20-year-old from New York’s Long Island, says he didn’t have anything to do with this year’s prank, but posted on YouTube aerial video he shot from his drone of the final product that’s since generated tens of thousands of views.

Huffman said a friend involved in the prank told him the group had spent about six months planning the effort.

The prank tradition isn’t an annual event at MIT and tends to happen spontaneously by groups of students that, for the most part, want to remain anonymous, he added.

“It’s kind of cool to see the hacking culture has been maintained,” Huffman said. “These are things you hear about when you first come to MIT.”