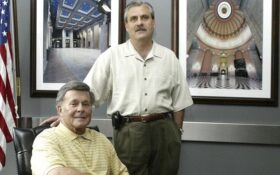 A powerful Ohio lobbyist who spent decades at the center of many of the state’s significant policy battles was found dead in Florida as he faced charges in a sweeping federal bribery investigation, authorities said Tuesday.

Neil Clark, 67, was found dead Monday by a bicyclist in an isolated area of Collier County, Florida, where he had been living, authorities said.

The local sheriff’s office provided a report describing the body being found, and the county medical examiner confirmed the body was Clark’s. The cause of death wasn’t determined, but a medical investigation and an autopsy were being performed.

When officials reached out to the man’s wife, she said that the couple was having financial issues and that she had not heard from her husband for a couple of hours, according to the sheriff’s report.

“It’s just a tragic loss of a good friend,” Clark’s attorney Will Ireland told WBNS-TV. He declined to provide any additional information on Clark’s death.

Clark had pleaded not guilty to the role federal prosecutors allege he played in an elaborate $60 million scheme led by then-Ohio House Speaker Larry Householder to pass legislation containing a $1 billion bailout for two Ohio nuclear power plants. Clark had denied all wrongdoing.

Former U.S. Attorney David DeVillers mentioned Clark’s death during a presentation on the government’s bribery probe Tuesday to the board of the Office of Ohio Consumer’s Counsel, which represents Ohio’s residential utility customers.

Clark was a larger-than-life figure at the Ohio Statehouse, where he often represented clients during their toughest legislative and public relations battles.

He fielded media calls for the Electronic Classroom of Tomorrow, for example, as the now-shuttered online charter school wrestled with allegations of attendance tracking errors. Clark also lobbied for some payday lending interests before that industry became the center of a previous House speaker’s downfall.

He had said he was writing a tell-all book about his time at the Statehouse.

Before becoming a lobbyist, Clark was an aide and finance director for the Ohio Senate Republicans, gaining inside experience in state budget-making with which he was able to help his many lobbying clients.

Clark parlayed his Senate work into an advertising and communications business and eventually a powerhouse bipartisan lobbying partnership with Paul Tipps, a former Ohio Democratic Party chairman who died in 2015.

The pair formed State Street Consultants in 1999, which grew into the largest government affairs consulting firm in Ohio, with clients including BP, Limited Brands, AK Steel, the American Cancer Society and the Cincinnati schools. The two ultimately had a nasty falling-out, their firm dissolved, and Clark founded his own firm, Grant Street Consultants.

“In matters in which a defendant has passed away, the process is that a ‘Suggestion of Death’ is typically filed upon receipt of a death certificate, resulting in dismissal of the decedent from the case but not impacting the rest of the case,” Acting U.S. Attorney Vipal J. Patel said in a statement. “All that will be addressed in due course. For now, we extend our condolences to Mr. Clark’s family and friends.”