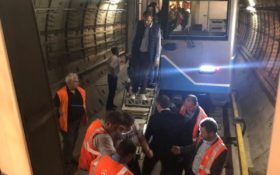 About 1,000 commuters have been trapped in a Moscow subway for several hours because of a power outage.

Moscow’s subway said in a statement that passengers of three subway trains have been safely evacuated and there have been no injuries.

It said that Tuesday’s glitch on the Solntsevo line was caused by a power outage, adding that it was working to resume normal traffic along the line. The Interfax news agency said that there were more than 1,000 passengers in the three trains that were trapped.

The malfunction was unusually big for the capital’s sprawling rapid transit system, which carries up to 9 million passengers a day.