Potential hurricane heading toward Florida Monday? What you need to know... - The Horn News 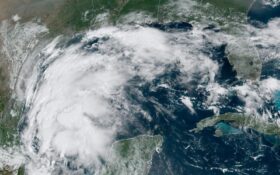 Subtropical Storm Nicole formed in the Atlantic Ocean on Monday, threatening to bring a prolonged period of hazardous weather to parts of the Bahamas and the southeastern United States, but it should still be too far off Florida’s coast on Tuesday to affect voting on Election Day.

“We won’t really start to see any significant impacts from Nicole until really Tuesday night to Wednesday, so really it shouldn’t have a huge impact on voting operations tomorrow,” Papin said.

Take a look at this message from the National Hurricane Center —

Pappin added, “Unfortunately this is going to be a very large storm, with a very large wind field on the north side. This is going to cause quite substantial surf, potentially dangerous storm surge somewhere along the Florida east coast, and heavy rainfall and probably significant winds over a large area of the eastern Florida peninsula coast.”

At 5 a.m. Monday, the “sprawling” storm had top winds of 45 mph (75 kmh) and was centered about 555 miles (895 kilometers) east of the northwestern Bahamas, the Miami-based National Hurricane Center said in an advisory.

“It’s not out of the question for Nicole to reach hurricane strength, especially given how warm the waters are in the vicinity of the Bahamas,” the advisory said. “It should be stressed, however, that no matter Nicole’s ultimate intensity, the storm’s large size will likely cause significant wind, storm surge, and rainfall impacts over a large portion of the northwestern Bahamas, Florida, and the southeastern coast of the United States during much of the upcoming week.”

Forecasters advised those living in the central Bahamas, Florida, and along the southeastern coast of the United States to monitor progress of the storm. It was expected to produce heavy rainfall across the northwestern Bahamas Tuesday through Thursday, impacting portions of Florida and other areas of the U.S. coastline mid-to-late week.

Large parts of Florida are still reeling from destructive Hurricane Ian, which slammed into the southwestern portion of the state in Sept. 28 as a strong Category 4 hurricane and dumped massive amounts of rain, causing flooding across central Florida.

A subtropical storm is a non-frontal low-pressure system that has characteristics of both tropical and extratropical cyclones. They tend to have a larger wind field, extending much farther from their centers. Forecasters said the storm could possibly transition into a tropical system as it continues to develop.

The Atlantic hurricane season began on June 1 and ends on Nov. 30.