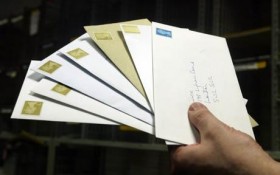 The U.S. Postal Service says it has found mail stolen in Hawaii more than a decade ago.

KHON-TV reported Monday that the family of a now-deceased postal worker discovered the stolen mail inside a storage unit and turned them over to officials.

The postal service says the stolen mail is being sent back in the next couple of days. The mail dates back about 13 to 15 years ago.

The stolen mail was mostly First-Class and Priority Mail and newspapers and magazines.

Officials haven’t identified the postal worker or his or her route. Most of the mail belonged to people living in the downtown Honolulu area.

The postal service says stolen mail that’s returned will have a label explaining the item’s delay and a number to call.