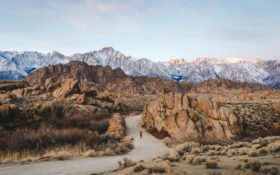 Great Smoky Mountains National Park officials have closed a couple of trails until further notice to allow a large concentration of black bears to feed on acorns.

The trails will stay closed temporarily for the safety of visitors and to allow bears to feed undisturbed on natural foods, the park said.

Bears often feed for more than 12 hours a day in the fall and are sometimes concentrated in places where food sources are abundant, the park’s news release said. Normally wary bears may act aggressively to defend such areas.

The animals usually are solitary, but they may be seen feeding closely during the fall.

Bears move around in the fall looking for acorns, sometimes traveling more than 30 miles to feed in a particular spot, the park said. The bears depend on fall foods such as acorns and grapes to store fat reserves for the winter.

The park’s website contains information about what to do if you encounter a bear while hiking.