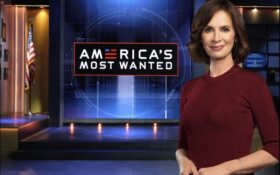 In a clip from the premiere of Fox’s fresh take on “ America’s Most Wanted,” a series where viewers are told about crimes in the hope of leading to an arrest, new host Elizabeth Vargas examines a 3D avatar of a suspect who appears to be standing next to her on set.

“Standing next to him you can learn a lot,” said Vargas, circling the likeness of a male. “One of the first things, he’s on the tall side.”

“Our viewers can see distinctive tattoos or scars or moles or even, for example, a distinctive way of walking,” said the host in a recent interview.

Vargas, who covered countless crimes in past jobs including hosting ABC’s “World News Tonight” and “20/20,” said she “couldn’t be more excited” for this opportunity to help close the loop on some of these cases.

“We used to get a lot of viewer reaction but we weren’t set up to handle any of those tips. I mean, what we just did was call up the detective on the case and say, ‘Let me forward this to you,’” she said. “Now I get to tell the stories and ask the audience for help.”

The series will also take advantage of the advancements in DNA research. “With all these people on DNA database and the fact that law enforcement can figure out if the DNA at a crime scene. .. It’s extraordinary.”

“America’s Most Wanted” was previously hosted by John Walsh who became a victim’s rights advocate after his six-year-old son, Adam, was kidnapped and murdered in 1981. It aired on Fox for 25 seasons before its cancellation in 2011. It was then picked up by Lifetime for a short run.

The show helped to capture more than 1,100 criminals — including 17 on the FBI’s Ten Most Wanted list. It’s also helped reunite 43 missing children with their families. Walsh released a statement in January that capturing criminals and finding missing children was his life’s work and he was excited about and in support of the show’s revival.

Vargas said this iteration will highlight crimes of all kinds.

“We have lots of different kinds of cases. We want to provide a variety of cases in a variety of situations in which our viewers can help us.”

The audience will also have options for contacting the show thanks to cell phones and social media.

“Viewers will be able to instantaneously call us or text us, but also reach us on these platforms,” Vargas said. Viewers can send in photos and videos they can quickly send to law enforcement: “We’re really excited by all the tools that the explosion in technology has provided us in the last 10 years.”