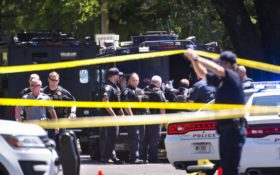 Three people were injured, one of them critically, in a shooting Wednesday near a popular shopping and entertainment district west of Phoenix, police said.

The suspect was taken into custody safely, Glendale Officer Tiffany Ngalula said in a televised briefing. The most seriously injured person was taken to a hospital, and the two others were expected to survive.

The Westgate Entertainment District, part of a complex that includes arenas for Cardinals football and Coyotes hockey, was humming with activity after many of its stores and restaurants were closed for more than a month due to the coronavirus outbreak.

The shooting had stopped by the time officers arrived, Ngalula said.

Police locked down the area and were methodically going through businesses to search for any additional victims or suspects, the spokeswoman said.

Gov. Doug Ducey said he’s monitoring the situation and “the state is here to continue to offer its full support to the victims and to the community.”

State Sen. Martin Quezada, a Democrat, wrote on Twitter that he saw a person “with an AR-15 shoot up Westgate.” The police spokeswoman said she was not able to confirm that the gunman used an AR-15.

“I saw 2 victims with my own eyes. Not sure how many others,” he wrote on Twitter. “I saw the shooter. Being told not to say anything else about details ’til I speak to police. I’m ok. Lots of shaken up people.”