Does it come with the hat? Pope-mobile up for auction - The Horn News 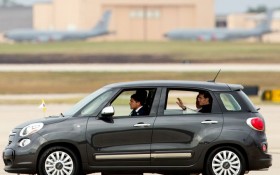 One of the two Fiats used by Pope Francis during his September visit to Philadelphia is going up for auction.

The car will be up for bid as part of the Philadelphia Auto Show black tie gala on Jan. 29. Bids will be accepted in person and online.

The Archdiocese of Philadelphia and auto show representatives made the announcement Wednesday.

They say the second black Fiat 500L used by Francis will be on display during the show, and might also be auctioned.

Proceeds will go to select archdiocese ministries and The Children’s Hospital of Pennsylvania.

Francis got out of one of the black Fiats to bless a boy with cerebral palsy when he arrived in Philadelphia, kissing him on the forehead. He’s made a point of using modest cars to emphasize simplicity.