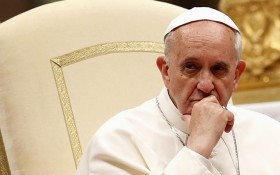 Is the end of the world coming?

A source close to Pope Francis may have the answer… if a 900-year-old doomsday prophecy is to be believed.

Journalist Austen Ivereigh, who works closely with the Vatican, predicted in 2013 that Pope Francis II planned to retire in 2020, according to Express.

“I don’t think there’s ever been any doubt that he will resign in 2020,” Ivereigh said.

In doing so, religious experts believe he could be fulfilling an ancient prophecy by 12th-century Irish Archbishop, Saint Malachy.

Saint Malachy was traveling to Rome from Ireland when he claimed to have received strange visions about the futures of the next 112 popes.

His famous 1139 “Prophecy of the Pope” predicted that at the end of the 112th Pope’s reign, who just so happens to be Pope Francis, would herald the fall of Rome and the beginning of the biblical Armageddon.

The prophecy reads: “In the final persecution of the Holy Roman Church there will reign Peter the Roman, who will feed his flock amid many tribulations, after which the seven-hilled city will be destroyed and the dreadful Judge will judge the people. The End.”

The chilling forecast has many on edge.

“You can look at it two ways,” Ivereigh said. “I mean politically, you could say it is quite clever because he’s also signaling to those people who do want to see a change in the church, that there isn’t much time.”

It’s important to note that Saint Malachy’s “Prophecy of the Popes” has critics. The Catholic church has no official stance on the prophecy. And many theologians have dismissed it as a 16th-century hoax.

Pope Francis himself may not be resigning anytime soon, too.

Ivereigh’s resignation prediction alluded to a key remark made by Pope Francis in the past, when the Vatican leader himself said he would have a very short papacy.

“… what I’m hearing now from people close to him is that he’s going to need seven years to achieve his five-year plan and that,” Ivereigh said. “Of course, would mean staying on until 2020.”

But with that said Ivereigh thinks that the Pope isn’t totally limited in the length of his papacy.

“He knows he is in the hands of God and so none of this is predictable.”