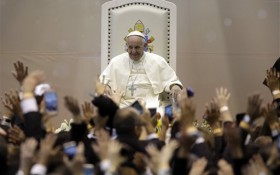 Pope Francis was wrapping up his trip to Mexico on Wednesday with a politically charged visit to the U.S. border for a huge open-air Mass as he focused on problems of violence, exploitation and migration, a hot issue for the U.S. presidential campaign.

He also visited a major prison — just days after a riot in another lockup killed 49 inmates — and he urged decent treatment for workers in a city famed for low-wage assembly jobs.

The altar for Wednesday’s Mass is snug against the U.S.-Mexico border, with just a highway between its edge and the Rio Grande. 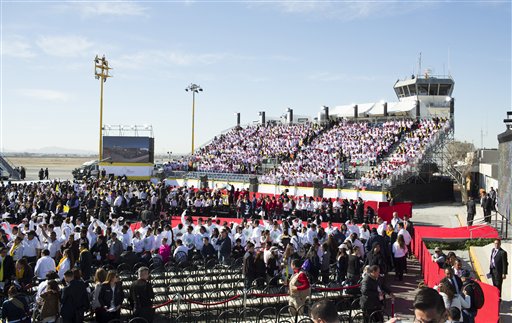 Clearly visible is the skyline of El Paso, Texas, where at least 30,000 people were expected at the Sun Bowl for a simulcast of the ceremony.

Francis was expected to stop at the border fence and give a blessing in honor of migrants on the other side, as well as those who died trying to get there.

Migration is a theme close to the pontiff’s heart. He has demanded that countries welcome those fleeing poverty and oppression and denounced what he calls the “globalization of indifference” toward migrants.

That message hasn’t gone down well with some in the U.S. at a time when border apprehensions of families and unaccompanied minors rose significantly in the last three months of 2015.

Republican presidential hopefuls Donald Trump and Sen. Ted Cruz have vowed to expel all the estimated 11 million immigrants in the U.S. illegally and build a wall along the entire border from Texas to California.

On the eve of Francis’ trip, Trump criticized the pope’s border stop.

“I don’t think he understands the danger of the open border that we have with Mexico,” Trump said in an interview with Fox. “I think Mexico got him to do it because they want to keep the border just the way it is. They’re making a fortune, and we’re losing.”

Late Tuesday, the Vatican spokesman, the Rev. Federico Lombardi, said the pope is concerned about the plight of migrants everywhere, not just in the United States.

“The pope always talks about migration problems all around the world, of the duties we have to solve these problems in a humane manner, of hosting those who come from other countries in search of a life of dignity and peace,” Lombardi said.

Francis came to the border metropolis of Juarez after flying out of Mexico’s capital with a final tour in the popemobile and serenades by mariachi bands.

His whirlwind five-day visit has focused heavily on the injustices faced by Mexico’s poorest, most oppressed and vulnerable to the country’s drug-fueled violence. And he has taken Mexico’s political and religious leaders to task for failing to do good for their people.

The pope makes a point of going to prisons on nearly every foreign trip, part of his longtime ministry to inmates and his belief that the lowest in society deserve dignity and hope. Mexico has about 250,000 prisoners, including about 8,000 female inmates. 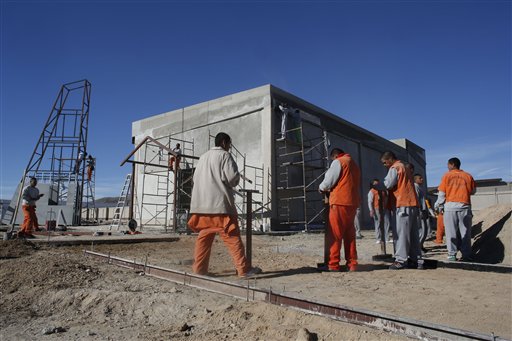 FILE – In this Jan. 17, 2016 file photo, inmates work on the construction of a chapel inside the state prison in Ciudad Juarez, Mexico.  (AP Photo/Dario Lopez-Mills)

On Wednesday, Francis told the 700 or so inmates gathered in the prison chapel that they cannot undo the past. But he said they have the possibility of “writing a new story and moving forward.”

“You have known the power of sorrow and sin and have not forgotten that within your reach is the power of the resurrection, the power of divine mercy which makes all things new.”

He urged the inmates to use their experience in prison for good, to help end the cycle of violence that has torn Mexico apart in recent years.

“The one who has suffered the greatest pain, and we could say has experienced hell, can become a prophet in society,” he said. “Work so that this society, which uses people and discards them, will not go on claiming victims.”

The meeting came a week after a riot at Monterrey’s Topo Chico prison, where rival gang factions bloodied each other with hammers, cudgels and makeshift knives.

Ciudad Juarez’s Prison No. 3 is relatively calm these days. But it has seen violent clashes before that reflected the chaos outside its walls.

Not long ago Juarez was considered the murder capital of the world, as cartel-backed gang warfare fed homicide rates that hit 230 per 100,000 residents in 2010. A rash of killings of women, many of them poor factory workers who just disappeared, attracted international attention.

Times have changed. Last year, the city’s homicide rate was about 20 per 100,000 people, roughly on par with Mexico’s nationwide average of 14 per 100,000 — and well below what is being seen in current hotspots of drug violence such as the Pacific resort city Acapulco.

Businesses have reopened and tourists are again crossing over from the United States to shop and dine. People say they no longer have to leave parties early to avoid being on the streets after dark.

“At least now we can go out. We go to the parks. We can walk around a little more at that time of night,” Lorena Diaz said, standing under a huge banner of Francis hanging from her second-floor balcony.

Diaz, who along with about 30 family members secured tickets for Wednesday’s Mass, welcomed the pope’s calls for Mexicans not to tolerate corruption and violence.

“He’s telling us to get out of the trenches, not to close ourselves off,” Diaz said.

Francis also met with workers, employers and advocacy groups, warning that God will judge those who exploit workers and make them “slaves of our day” for their own profit.

Francis urged employers instead to think of the type of Mexico they want to leave for their children.

“Do you want to leave them the memory of exploitation, of insufficient pay, of workplace harassment?” he asked. What air will they breath? An air tainted by corruption, violence, insecurity and suspicion, or on the contrary an air capable of generating alternatives, renewal and change?”

Juarez’s proximity to the U.S. has brought a job boom at hundreds of foreign-owned assembly plants known as “maquiladoras” that manufacture clothes, electronics and other goods to be shipped north. But many workers say conditions can be poor and pay low. At a recent demonstration, protesters said they were struggling to get by on wages of just $45 a week.