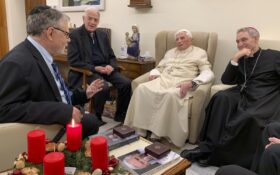 Pope Emeritus Benedict XVI, whose health has been deteriorating, is in stable condition and was able to participate in Mass in his room, the Vatican said Friday.

“Last night the Pope Emeritus was able to rest well,” Vatican spokesman Matteo Bruni said in a statement. “He also participated in the celebration of Holy Mass in his room yesterday afternoon. At present his condition is stationary.”

On Wednesday, Pope Francis revealed that his 95-year-old predecessor was “very ill” and he went to see him in his home in the Vatican Gardens.

In 2013, Benedict became the first pope in 600 years to resign, and he chose to live out his retirement in seclusion in a converted monastery in the Vatican.